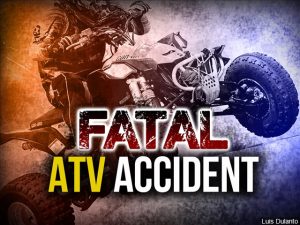 NEWS RELEASE: At 7:28 p.m. on Monday (July 5), Virginia State Police responded to a single-vehicle crash in the 400 block of Trents Store Ln [in the Stuart area.]. A 2013 Polaris ATV was traveling north in the roadway when it had a mechanical failure, ran off the left side of the road, overcorrected and traveled back into the road where it overturned. The driver, Gary W. Jones, 45, of Spencer, Va., died at the scene. He was not wearing a helmet. The crash remains under investigation.