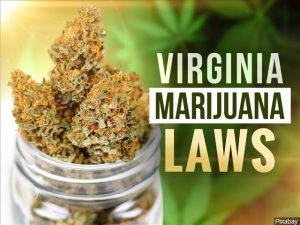 (Associated Press) — The legislation would allow adults 21 and up to legally possess up to one ounce (28.3 grams) of cannabis without the intent to distribute beginning July 1. It also would allow the home cultivation of up to four plants per household beginning July 1. Public use of the drug will be prohibited.

“This is not going to generate some ganjafest at Jiffy Lube pavilion out in the parking lot, because that is smoking in public. Just like you can’t drink in public, you can’t smoke in public under this,” Democratic Sen. Scott Surovell said.

It will be years before legal retail sales follow legalized possession. The bill lays out the complex process of creating a new state agency to oversee the marijuana marketplace, with sales beginning and regulations taking effect on Jan. 1, 2024.

Many parts of the bill dealing with the regulatory framework will have to be reapproved by lawmakers next year. The possession and cultivation pieces will not.

Republicans, who overwhelmingly opposed the bill when it initially went through the General Assembly, railed against the latest version, citing several reasons.

“The hard-fought compromise that barely made it out of this chamber and over to the Senate has just been discarded. And why is that? It’s because some activists want marijuana legalized and they want it legalized now, consequences be damned,” he said.

Some Republicans took issue with labor provisions in the new version of the bill, in particular a change that says the government can revoke or suspend licenses issued under the new law in cases where an employer has refused to “remain neutral regarding any union organizing efforts by employees.”

During the legislative session, the Senate sought to legalize simple possession beginning in July, but House Democrats argued that legalization without a legal market for marijuana could promote the growth of the black market. The bill as passed in February would not have legalized simple possession until 2024.

Herring said Wednesday that home cultivation would give Virginians a way to legally acquire cannabis while the retail market is being put in place.