Roanoke County Police have identified the woman driver killed this morning  when her car ran into a school bus near Hunting Hills Golf Club. Police say 39-year-old Donna Jean Divers of Wirtz  lost control, and her car then crossed the road, sliding sideways into the Roanoke County school bus. Divers died in the crash. A passenger,  42-year-old Christopher Duane Garrett of Wirtz, is hospitalized with injures police call serious. There were five people aboard the bus: a drive, three students and an aide. None required hospital treatment. 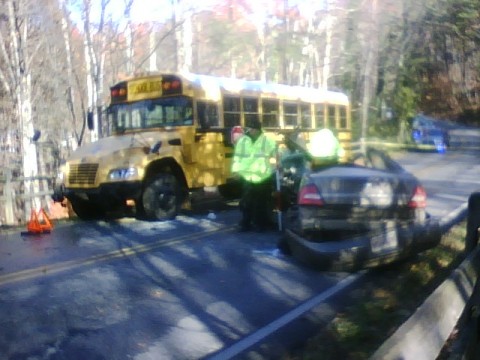 •     Location of Incident: 5200 block of Hunting Hills Drive, near the Country Club

Roanoke County Police have more information to release regarding this morning’s traffic crash involving a school bus and car.

The bus was traveling to Cave Spring Middle school and had five people aboard – the driver, an aid, and three special education students. Nobody on the bus was seriously injured in the crash, which happened at 8:00 a.m. in the 5200 block of Hunting Hills Drive, near the Country Club.

The female driver of the car that struck the school bus died at the scene. She’s been identified as 39-year-old Donna Jean Divers of Wirtz. Police say Divers lost control of the Nissan Altima she was driving, slid sideways, and struck the front of the bus. Although the investigation is continuing, police have concluded that speed was a factor in the crash.

A male passenger in the car was taken to the hospital with serious injuries. He’s been identified as 42-year-old Christopher Duane Garrett of Wirtz. Divers and Garrett were not wearing seatbelts.

The driver of the school bus has been identified as 69-year-old Elma Lee Roberts of Roanoke. Police say Ms. Roberts saw the car in the distance as the driver began to lose control. Ms. Roberts then applied the brakes in an attempt to avoid the car, which proceeded to cross the center line and strike the front of the bus.