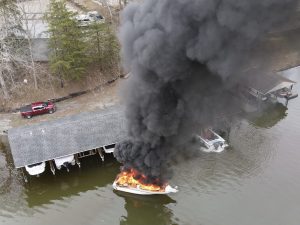 Franklin County public safety officials say six people were aboard a  newly-purchased boat that exploded, caught fire and sank Saturday on Smith Mountain Lake, but no one was serious injured. The department’s  Facebook page reports it happened at the Indian Point Marina, and the craft was engulfed in flames when responding fire crews arrived. Witnesses say those aboard the board told them they had just purchased the boat earlier in the day. The cause of the fire has not yet been determined.