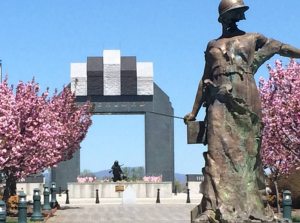 The National D-Day Memorial begins a new effort tomorrow to connect a major day in 20th century history to the small community that bore such a burden on it. The Bedford Boys Homefront Bus Tour shows some of the places around town where the soldiers socialized, worked and otherwise lived their daily lives until being sent off to war. WFIR’s Evan Jones the story: