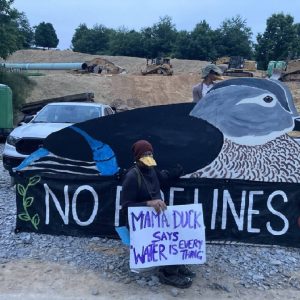 From Appalachians Against Pipelines

UPDATE: The pipeline protesters have been arrested after halting work on that portion of the pipeline for seven hours.

PREVIOUS: Mountain Valley Pipeline protesters have established a blockade in the Pembroke area of Giles County that is preventing MVP workers from accessing the construction site. According to Appalachians Against Pipelines, the blockade includes a large wooden duck, with three people locked to it and another person on top.