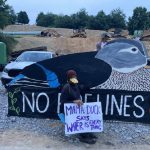 From Appalachians Against Pipelines

RICHMOND, Va. (AP) — Hundreds of opponents of a natural gas pipeline rallied on Saturday in Virginia’s capital in advance of an upcoming key regulatory decision.

The Virginia State Water Control Board is expected to vote Tuesday on whether to allow construction of portions of the Mountain Valley Pipeline in wetlands and across over 200 Virginia waterways, the Richmond Times-Dispatch reported.

The Rev. William Barber, a North Carolina-based civil rights leader, told the crowd at Byrd Park that projects like the proposed pipeline are “an abusive sin” that would harm the poor.

The planned 303-mile (488-kilometer) mile pipeline will take natural gas drilled from the Marcellus and Utica shale formations and transport it through West Virginia and Virginia. A 75-mile extension into central North Carolina is also proposed.

Mountain Valley Pipeline spokesperson Natalie Cox called Barber’s message that the project is sinful “an uninformed and unproductive comment.” The pipeline, Cox added, is “designed to provide reliable, affordable, clean-burning natural gas to homes and businesses in Virginia and throughout the eastern United States.”

The proposed North Carolina extension took a hit earlier this month when Virginia’s State Air Pollution Control Board voted against a permit for a gas compressor station located in a county that borders North Carolina.