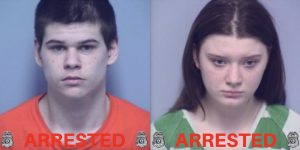 Roanoke Police immediately began searching for Pellitteri and Sarks after the warrants were obtained. On February 11th, Pellitteri and Sarks came to the Roanoke Police Department where the above warrants were served. They were both taken into custody without incident. This remains an ongoing investigation and no further details are availableat this time.

PREVIOUS:  On February 8, at approximately 9:40 p.m., Roanoke Police were notified by the City of Roanoke E-911 Center of a person with a gunshot wound in the 500 block of Mountain Avenue SW. Responding officers located two adult men with what appeared to be non-life threatening gunshot wounds. Roanoke Fire-EMS transported both men to Carilion Roanoke Memorial Hospital  for treatment. Preliminary investigation shows two suspects entered the home and engaged in a physical altercation with the victims that led to the shooting. It is believed that the suspects and victims are acquainted with one another. No suspects were located on scene and no arrests have been made regarding this incident. Further details are limited at this time. This is an ongoing investigation.