Man wanted for holding up the same bank twice this year

The Botetourt County Sheriff’s Office is asking for the public’s help in identifying a man who they say robbed the Carter Bank and Trust on Route 460 — twice. The bank is located between Bonsack and Blue Ridge. The second holdup occurred last Saturday. Authorities say in both cases, the man took a handwritten note from his wallet and claimed to have a gun. 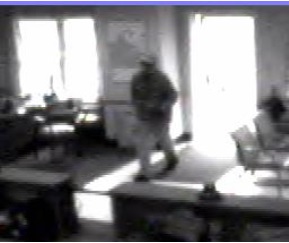 The Botetourt County Sheriff’s Office is attempting to identify a male subject that robbed the Carter Bank and Trust on Route 460 on two separate occasions.

The male is described as follows:  White Male, 5’6” – 5’8”, 110 – 120 lbs., 45 – 50 years of age, mostly grey – neck length hair, worn/wrinkled complexion, unshaven salt and pepper beard.  He was wearing an American flag bandana around his head with sunglasses that were tinted brown, a grey hoodie with a small oval shaped logo on the chest, a tan canvas style vest, blue jeans and work boots.  The male has a dark tattoo on the back of his right hand.  The clerk also said he smelled strongly of cigarette smoke.

The male left in a red 2000 model Chevrolet Cavalier, 4 door with a dent on the passenger side front fender.

The vehicle had white license plates and it left east bound on Route 460 toward Bedford.

Anyone with information is encouraged to contact Detective D. W. Moyer at 540-473-7913 or email:   dmoyer@botetourtva.gov