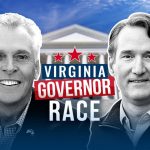 (from Roanoke College) Just a few days before Election Day, the race for Virginia governor is a statistical tie. Former Democrat Gov. Terry McAuliffe holds a 1-percentage point lead over Republican Glenn Youngkin (47%-46%) with 6% undecided, according to The Roanoke College Poll.[1] The downticket races are also within the margin of error, with Del. Hala Ayala (D) ahead of former Del. Winsome Sears (R) 46%-44% for lieutenant governor and Attorney General Mark Herring (D) leading Del. Jason Miyares (R) 46%-45% in the race for attorney general. The Institute for Policy and Opinion Research interviewed 571 likely Virginia voters between October 14 and October 28 and has a margin of error of +4.1%.

Republicans hold an advantage in being extremely enthusiastic about voting (49% to 32% for Democrats), while most partisans say they are almost certain to vote or have already voted (76% of Republicans vs. 77% of Democrats). Likely voters see the economy (38%) and education (22%) as the most important issues in the election ahead of COVID (13%), health care (11%), and race relations (7%). Most voters (73%) decided who to vote for more than a month ago, but 19% decided in the last month or the last week.

Analysis: “Turnout, turnout, turnout. With both candidates claiming more than 90% of the votes from their party, it is a question of who votes,” said Dr. Harry Wilson, senior political analyst of the Roanoke College Poll. “Youngkin leads among Independents, so McAuliffe needs to turn out more Democrats. Virginia Democrats have done that for several elections in a row, but the significant enthusiasm gap suggests they may not be able to do it in 2021. It could be a very late Election Night…or week.”