Mendenhall going back to BYU tonight with his Cavs 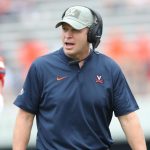 (AP) For the longest time, Virginia coach Bronco Mendenhall wanted no part of a game with BYU. Too many ties. Too many memories. Too many emotions. But it was always looming on the schedule after he was hired at Virginia (6-2) six years ago. Originally planned for 2019, it was pushed back on the calendar to Saturday, where now Mendenhall will face his former school for the first time in Provo, Utah. He’s not sure the type of greeting he will receive from the BYU faithful inside LaVell Edwards Stadium. Best guess: Favorable. [WFIR will carry the game with the kickoff at 10:15pm; pregame starts at 9]

After all, Mendenhall did help the Cougars to five 10-win campaigns in his 11 seasons at BYU. He did lead them to a bowl game each season he was in charge. But loyalty lies deep with BYU blue, not Virginia’s navy. The 25th-ranked Cougars (6-2) are coached by Kalani Sitake, who’s carried on the winning tradition since taking over for Mendenhall.

“I really can’t control what kind of welcome I do or don’t receive, but what I can express is gratitude,” said Mendenhall, who was named the Virginia coach in December 2015. “That’s what I intend to do, and then do the very best I can to prepare my team so they can have success.”

His ties to BYU are strong. His brother played there. His dad played there. He won 99 games there, which is second in school history only to the legendary LaVell Edwards (257). The original schedule had the game taking place in Charlottesville in 2019, with a return trip to Provo, Utah, in ’23. But it was reconfigured in 2016, with the first meeting postponed to this season in Provo, and the ’23 contest switched to Charlottesville.

“I do remember when I was announced (I was) leaving BYU that I wouldn’t play this game. I didn’t know how to make it any clearer,” Mendenhall recalled. “I’m much better now because very few, if any, players are left. … That makes it easier. Not easy but easier.”

He did play a role in BYU quarterback Jaren Hall’s arrival, along with defensive lineman Uriah Leiataua. “I love Bronco. I love his staff. But this is our team now,” Leiataua said. “I love Kalani. I love everything he’s done for us here.” Sitake has kept things rolling right along at BYU. The Cougars are 14-4 under Sitake when playing as a ranked squad and boast a 4-1 mark against Power 5 schools this season. Now, a tough and emotional showdown against a Virginia team that’s won four straight. It’s also a return for 10 Virginia staff members who either coached, played or worked on the football side at BYU.