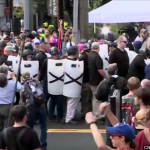 (AP) A jury has awarded millions of dollars in damages against white nationalist leaders for violence that erupted during the 2017 Unite the Right rally in Charlottesville. After a nearly monthlong civil trial, a jury in U.S. District Court in deadlocked on two key claims Tuesday but found the white nationalists liable on four other counts. The jury awarded slightly more than $25 million to nine people who suffered physical or emotional injuries during two days of demonstrations. The lawsuit accused some of the country’s most well-known white nationalists of plotting the violence, including Jason Kessler, the rally’s main organizer; Richard Spencer, who coined the term “alt-right”; and Christopher Cantwell, a white supremacist who became known as the “crying Nazi.”