Judge to get update on abuse claims by immigrant teens 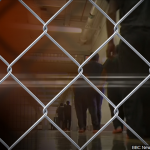 ROANOKE, Va. (AP) — A judge is set to hold a status conference in a federal civil-rights lawsuit filed on behalf of immigrant teens who allege they were severely abused inside a Virginia juvenile detention center.

The Associated Press reported last month on sworn statements from six Latino teens who detailed abuse they said they endured at the Shenandoah Valley Juvenile Center.

The teens said they were beaten while handcuffed, locked up for long periods in solitary confinement, and left nude and shivering in concrete cells.

Lawyers for the detention facility have denied all allegations of physical abuse.

U.S. District Judge Elizabeth Dillon has scheduled a telephone conference call Tuesday to get an update on the case from lawyers for both sides.