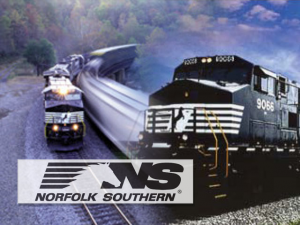 Three years after Norfolk Southern moved 500 jobs from Roanoke to Norfolk and Atlanta, the railroad made it official today – it will move its entire corporate staff to Atlanta. Norfolk has served as the company’s corporate headquarters ever since the Norfolk and Western and Southern Railways merged more than three decades ago. Today’s announcement is no surprise; it comes after months of reports such a move was likely in the works. But it will mark the end of Norfolk Southern’s significant corporate presence in Virginia, one that goes back to the founding of the Norfolk and Western Railroad in the late 1800’s.

From the Associated Press: Records from Atlanta’s economic development authority indicate the company proposes construction of a new headquarters campus with 750,000 square feet (69,600 square meters) of office space in the city’s Midtown area. The project would involve about 850 full-time workers relocating to Atlanta. Deal announced the company’s plans Wednesday afternoon at the Georgia Capitol. Norfolk Southern’s railroad subsidiary operates in 22 states and the District of Columbia, transporting freight that includes automotive and industrial products and coal.

News release: Norfolk Southern Corporation (NYSE: NSC) today announced plans to relocate its headquarters to Atlanta. “Alignment, collaboration, and accountability are the hallmarks of Norfolk Southern’s plan to transform this company and its culture. Our new headquarters in Atlanta advances these key elements of success,” proclaimed Jim Squires, chairman, president and chief executive officer, addressing employees this morning. “Our potential has always been great and now is greater still, as we bring together all of our headquarters functions into a single, integrated team.”

“Norfolk Southern is grateful to the city of Norfolk and the commonwealth of Virginia for their support of our company over the last three plus decades,” Squires continued. “We look forward to the continued growth of our business in the commonwealth as the many operating employees who remain serve the customers and promote economic development in this integral part of our network.”

“As a major hub for both transportation and innovation, Georgia is a fitting home for Norfolk Southern’s new headquarters,” said Georgia Gov. Nathan Deal. “As the No. 1 state for business six years in a row, Georgia has become a preferred location for industry leaders such as Norfolk Southern who seek an expansive infrastructure network, a culture of collaboration, and ready-to-work communities. This announcement also reinforces Georgia’s distinction as the Southeast’s gateway to global commerce. We appreciate Norfolk Southern’s significant investment in Fulton County and look forward to celebrating the company’s future growth and continued success.”

Atlanta Mayor Keisha Lance Bottoms added, “With a shared history dating back to 1846, we are proud Norfolk Southern now calls Atlanta home. This relocation was made possible, in part, by the passing of the Gulch deal and is a reminder that great things happen when our public and private sectors work together. Norfolk Southern will be a great addition to our city, and I look forward to partnering with them as we work to build One Atlanta.”

To create its new headquarters, Norfolk Southern is in advanced discussions to purchase a site from Cousins Properties at 650 West Peachtree St. NW, in the heart of Midtown Atlanta’s growing intersection of corporate, technological, and academic power. In addition, Norfolk Southern intends to engage Cousins Properties to manage the development of its new headquarters. Details of this engagement are expected during the first quarter of 2019.

Progress on Norfolk Southern’s move to Atlanta has already commenced and will span the next several years as the new headquarters is constructed.

Squires concluded, “Norfolk Southern values Atlanta’s vitality and looks forward to contributing more of our own energy to its business, social, and community environments.”