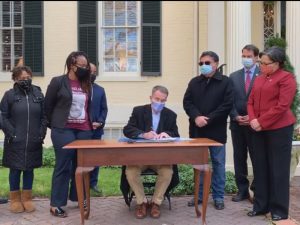 Governor Northam held one of his many ceremonial bill signings yesterday in Richmond, but this one did not turn out like almost all others. One of the people invited to join in the celebration denounced the measure is wholly ineffective. More from WFIR’s Evan Jones:

The Marcus Alert bill is named after Marcus Peters, fatally shot by Richmond Police during a mental health crisis. It will require police to include a greater mental health component to future responses. Governor Northam and lawmakers key to its passage gathered yesterday to celebrate the bill’s enactment. Also there was Peters’ sister, Princess Blanding, but instead of praising those assembled and the bill they helped pass, Blanding excoriated them. Lawmakers who spoke later said the Marcus Alert is an important start, and if it should be changed down the line, they pledged to do so.