Hunter says he is innocent at press conference today 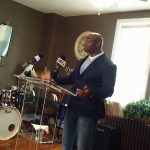 Roanoke Peacemakers founder Shawn Hunter says stalking charges filed against him in Bedford are untrue — and he has video to prove it. A woman called police in late October claiming Hunter was following her in a Wal-Mart parking lot. He was served with a warrant several days later. Hunter called a news conference today to state his case. A court hearing on the misdemeanor charge is scheduled for December 7th. Hunter said that several days after the October 30th incident the woman and several friends showed up at the Peacemakers building on Melrose Avenue and confronted him.