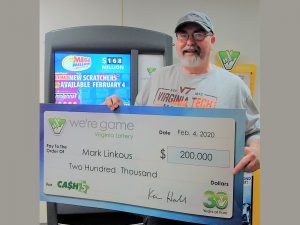 NEWS RELEASE: Mark Linkous bought two tickets for the Virginia Lottery’s February 2 Cash 5 night drawing. He had the exact same five numbers on both tickets: 9-20-27-31-33. When those ended up being the winning numbers, both of his tickets won the $100,000 top prize for a total win of $200,000.

“I couldn’t believe it!” the Pulaski man told Lottery officials as he claimed his prize.

He bought both tickets at BP Express Stop, located at 611 East Main Street in Pulaski.

He discovered he had two winning tickets as he sat watching television the day after the drawing. At first he thought he’d only matched three numbers, rather than all five.