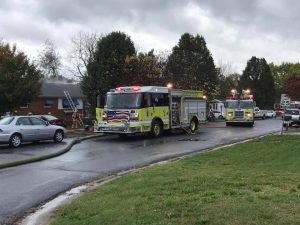 UPDATE: The Roanoke County Fire Marshal’s Office has determined that this fire was electrical in nature and caused approximately $30,000 in damage.

PREVIOUS: Roanoke County and City firefighters were summoned to battle flames in a north county home just before noon. Fire officials say crews arrived on the 5400 block of Mayfield Street in the Hollins area to find heavy smoke coming from one end of the home – and an elderly man injured in the front yard. Damage to the home appears to be heavy; the man’s injuries are believed to be non-life threatening. There is no immediate word on the cause.

NEWS RELEASE: Roanoke County Fire and Rescue responded at about 11:50 a.m., on Thursday, October 31, 2019 to the 5400 block of Mayfield Street, which is located in the North County area, for the report of a residential structure fire. First arriving crews from Station 1 (North County) found heavy smoke coming from one end of the single story brick home. They also found one elderly adult male in the front yard who was injured. That patient has been transported to a local hospital with what appear to be non-life-threatening injuries. The fire was brought under control in about 10 minutes. There is a fair amount of fire damage to the home, mostly in the area of the kitchen. It is believed that the elderly male was the only occupant at the time of the fire. Units from North County, Hollins, Vinton, and the City of Roanoke responded to the fire. The Roanoke County Fire Marshal’s Office is on scene to investigate a cause and estimate damages.