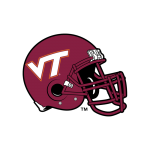 BLACKSBURG, Va. (AP) — There was little for Virginia Tech fans to be disappointed about on Saturday, but coach Justin Fuente put a damper on a festive day when he reaffirmed that Bud Foster planned to retire at season’s end. “I think his mind is pretty made up,” Fuente said, smiling.
Such news was disappointing because the Hokies’ defensive coordinator continues to prove his chops. Virginia Tech’s defense put together a vintage performance Saturday, and Hendon Hooker threw for 153 yards and two touchdowns to lead No. 25 Virginia Tech to a 28-0 victory over Pittsburgh in a steady downpour.
Hooker threw touchdown passes to Tré Turner and Damon Hazelton, and Virginia Tech held Pittsburgh to under 200 yards and scored on a fumble return, as the Hokies (8-3, 5-2 Atlantic Coast Conference) notched their sixth win in their past seven games.
“I can’t say enough good things about our guys,” Fuente said. “I felt that way about them early in the year, too, though. I really did. I’m enjoying every moment with them. I think they’re a special group of young men. They’ve been through special circumstances and stuck together.”

The win sets up a showdown next weekend with rival Virginia, with the victor claiming the ACC’s Coastal Division and an ACC championship game berth on Dec. 7.
Pittsburgh (7-4, 4-3 ACC) finished with a season-low 177 yards. Kenny Pickett completed 10 of 26 for 103 yards to lead the Panthers.
“Disappointing performance, obviously, today,” Pittsburgh coach Pat Narduzzi said. “A lot of things I saw — too many penalties, 0 for 3 on fourth downs … We don’t make any plays. Just a disappointing performance.
“I give Virginia Tech a lot of props for what they did out there today. Bud Foster’s defense came to play, I can guarantee you that … It’s hard to win when you can’t get in the end zone. We had some field position at times, but just didn’t do anything with it.”
Hooker’s 71-yard pass to Tayvion Robinson led to James Mitchell’s 1-yard touchdown run in the first quarter, giving the Hokies a 7-0 lead. Moments after that score, Norell Pollard returned a Pickett fumble 7 yards for a touchdown that pushed the lead to 14.
Virginia Tech basically put the game away with Hooker’s 3-yard touchdown to Turner with 45 seconds left in the first half. Hooker completed 10 of 13 passes in moving to 6-0 as the starting quarterback.
“Everyone’s just coming together as a family and just showing love and support,” Hooker said. “At the same, everyone’s expecting you to do your job.”