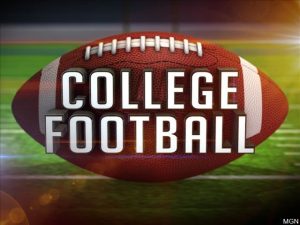 BLACKSBURG, Va. (AP) — Khalil Herbert ran for 162 yards, including a 76-yard touchdown, and Virginia Tech ended a four-game slide with a 33-15 victory against rival Virginia on Saturday night.

The Hokies (5-6, 5-5 Atlantic Coast Conference) also got a big play from Tayvion Robinson, who turned a short pass from Braxton Burmeister into a 60-yard TD, a scoring run from wide receiver Tre Turner and four field goals from Brian Johnson to regain the Commonwealth Cup they’d held for 15 years before losing it to the Cavaliers last year.

“We had a rough couple of week so being able to finish it out with a big (win) on our rival — that’s a really great feeling. Guys are happy. The cup is back home,” said Herbert, who had his sixth 100-yard game this year and gained his yardage on just 20 carries.

Coach Justin Fuente said his team performed as he’d hoped, especially after he showed them film this week highlighting that it was Virginia that wanted it more a season ago..

“I think my team got tired of me telling them how hard they play,” Fuente said. “I felt good about the way our guys played. We looked fast and we were rarely out of position.”

Virginia (5-5, 4-5) had its four-game win streak end. The Cavaliers drove 75 yards for a touchdown and a 7-3 lead with their first possession, but managed just 71 yards the rest of the half while the Hokies scored all five times they had the ball to lead 27-7.

The Cavaliers also started the night among the national leaders in run defense, allowing just 125.9 yards per game, but yielded 252 yards by the Hokies.

“There wasn’t a lot of screaming and yelling or anything else,” coach Bronco Mendenhall said of his halftime locker room. “It was just execution. We gave up two giant plays on defense and we were inconsistent on offense. It was just a matter of executing our way back into the game.”

The Cavaliers closed to within 30-15 with a third quarter touchdown, and Mendenhall said it looked like a “really strong finish, a competitive ending” was in the offing, but a second interception of Brennan Armstrong ended any chance they could make it happen.

Turner’s 6-yard run capped a 17-play drive to give the Hokies a 10-7 lead, and after Johnson’s second field goal and a Virginia punt, Herbert bolted off the right side and raced untouched down the center of the field for his longest run of the season.

On Virginia Tech’s next possession, with halftime looming, Burmeister hit Robinson along the Hokies sideline, he spun away from cornerback De’Vante Cross and raced down the sideline, scoring 31 seconds before the half.

The Cavaliers earlier failed to cash in on a muffed punt after taking over at Virginia Tech’s 24. Two runs netted three yards, Brennan Armstrong misfired on a pass and Brian Delaney’s 39-yard field-goal try missed, the first by a kicker against the Hokies all season.

After halftime, the Cavaliers executed a fake punt to keep a drive alive, but three consecutive incompletions by Armstrong forced them to punt for real four plays later.

Armstrong finished 25 of 46 for 259 yards with two touchdowns.

Fuente looked spent in his postgame media availability and talked of how difficult the season has been on his team — and every other team — because of the pandemic.

“It’s been the most trying season, and this has nothing to do with wins and losses,” he said. “Every head coach I’ve talked to at midfield has talked about how hard this has been.”

Virginia: The Cavalier’s offense looked discombobulated after the opening drive, and Armstrong, after back-to-back 400-total yard performances, was well contained when he tucked the ball to run and was under increasing pressure when he dropped to throw.

Virginia Tech: The Hokies had struggled in recent weeks converting on third down, with just seven conversions in 22 tries combined in losses to Pittsburgh and Clemson, but they had no trouble against the Cavaliers, converting their first seven and 9 of 16 overall.

Both teams will hope for bowl invitations on Dec. 20.