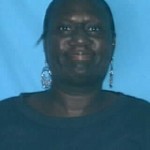 UPDATE: From The Henry County Sheriff’s Office: Investigators have been searching for Bernice Proctor since approximately 4:20pm on February 17, 2016 when her vehicle was located near 435 Old Liberty Drive in Martinsville, Virginia.  Ms. Proctor was located in a wooded area near her vehicle at approximately 4:00am on February 18, 2016.  She was transported to and is currently receiving treatment at the Memorial Hospital of Martinsville and Henry County.  Medical personnel are treating her for hypothermia and dehydration.  She did not suffer any injuries.

The Henry County Sheriff’s Office and the family would like to thank the Virginia State Police, Virginia Department of Emergency Management, Henry County Department of Public Safety and numerous volunteer search and rescue organizations with their valuable assistance in locating Ms. Proctor.

Bernice Proctor is approximately 5’10”, 130lbs, black hair and brown eyes.  Her clothing description is unknown at this time.

Anyone having information regarding the whereabouts of Bernice Proctor or has seen anyone matching her description in the area is asked to call 911 immediately.  There is no information at this time that would lead authorities to believe foul play is involved.