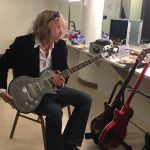 The B-52’s tonight aren’t the only notable performers in town. Blues-rock guitarist and Grammy winner Paul Nelson has played with the likes of Eric Clapton,Vince Gill, Buddy Guy and Joe Walsh. Tomorrow night Paul Nelson and his band are in concert at the very cozy Blue 5 Restaurant in downtown Roanoke.Nelson is touring in support of his new album. His Blue 5 appearance begins tomorrow night at 9:30.