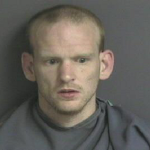 A Franklin County man is charged with stealing items ranging from jewelry to a floor jack last week from two buildings in the Henry area. The county sheriff’s office says Kevin Pulley was arrested a short distance away from one of the two break-in locations.

From the Franklin County Sheriff’s Office:

Additional remarks:  On 11/15/2018, deputies from the Franklin County Sheriff’s Office responded to the 2000 block of Providence Church Rd in reference to a report of a suspicious vehicle and possible break in at this location. A citizen had observed the vehicle leave the area and provided a description. Upon arrival at the scene, deputies were able to determine that a break in had in fact occurred. They were soon able to locate the suspect vehicle which was unoccupied. A search of the area resulted in locating the suspect on Pathfinder Dr., a short distance from the original break in.

The suspect is identified as Kevin James Pulley. Pulley was arrested and charged with Breaking/Entering to commit Felony for the offense on Providence Church Rd.

As the investigation continued a search warrant was executed on the suspect vehicle in which jewelry, a floor jack, hand tools, and music cd’s were located. A follow up was also done at the suspects address resulting in the recovery of a television and assorted jewelry.

With the recovery of some these items the Sheriff’s Office was able to link the suspect to another report of a Breaking/Entering in the 1000 block of Fork Mountain Rd that occurred on 11/14/2018. Pulley has been charged with Breaking/Entering to commit Felony, Grand Larceny, and Destruction of Property for this offense. The investigation is continuing, and other charges may be pending.