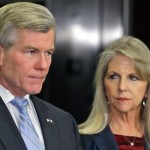 RICHMOND, Va. (AP) — Former Virginia Gov. Bob McDonnell’s attorney says his client didn’t get a fair trial and will appeal his convictions on public corruption charges. McDonnell was convicted Thursday on 11 of 13 counts in a case that derailed the career of the onetime rising Republican star. His wife, Maureen, was convicted of nine of 13 charges. The former governor wept when the verdicts were read, but told reporters as he left the courthouse that his “trust remains in the Lord.” His attorney, Henry Asbill, said he was shocked and disappointed by the verdict. Maureen McDonnell’s attorney declined to comment. McDonnell and his wife now face up to 20 years in prison on each count, although a presentencing report by the federal probation office will result in a lighter recommendation. Sentencing is scheduled for Jan. 6.