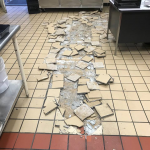 An unusual day, to say the least, at East Salem Elementary. City officials say it was “thermal movement in the concrete floor” that caused floor tile pieces to pop out in the kitchen area. That created noises that caused concerns within the school. East Salem was evacuated as a precaution, and fire, gas and electric crews were all brought in to check things out. As a precaution, all students were transported to Andrew Lewis Middle School to await an early dismissal.

From Salem City Schools: We believe that thermal movement in the concrete floor forced old quarry tile pieces to pop-off the surface that they were attached to in the kitchen area of the school. The tile is original from 1963, and at the time of installation there were no expansion joints. The noise that accompanied the disruption of the tile, understandably, caused concern with workers in that area. All utilities have been checked by Salem Electric Department and Roanoke Gas and cleared by the Salem Fire and EMS Department. The Salem Fire and EMS Department cleared the building as of 9:45 a.m.