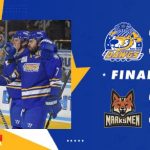 Roanoke struggled to find its offense until the Marksmen opened the score at 12:49. Austin Alger turned an odd-man rush into the opener for Fayetteville to give the hosts the lead. The Dawgs started unleashing shots at that point, and ended the period with a 15-9 advantage in the shots column, but trailed by a goal after the first frame.

The second period saw another tug of war for control of the game similar to Friday night. Ford’s incredible shot from the right wing dot tied the score just 48 seconds into the middle stanza. A greasy goal by Fayetteville’s Matt McNair at 18:39 seemingly gave the Marksmen a lead it could take into the locker room, but Stubbs finished off a rebound outside of the Fayetteville crease with just 7.6 seconds left before the intermission to tie the score at 2-2 heading to the break.

The Dawgs battered the Fayetteville net with shots in the final frame, but the Marksmen defense survived a swarm of Roanoke chances. Finally, DeVito was able to carry a puck all the way around the zone from the right wing, to the trapezoid, and out to the left wing where he let the game-winning goal fly into the Marksmen cage at 15:29. A few late empty net chances from the Marksmen came up empty, and the Dawgs won for the fourth straight game, including their fourth win in their last five games at Crown Coliseum.

Austyn Roudebush made 23 stops on 25 shots faced for Roanoke, while Fayetteville’s Connor O’Brien stopped 39-of-42 chances. Roanoke was 0-for-4 on the power play, while the Marksmen went 0-for-3.

Roanoke will return home on Friday, January 20 at 7:05 p.m. EST to face the Birmingham Bulls at Berglund Center. Season tickets and single-game tickets are available by calling the Rail Yard Dawgs office, visiting the ‘Tickets’ page on our website, or by visiting the Berglund Center box office.