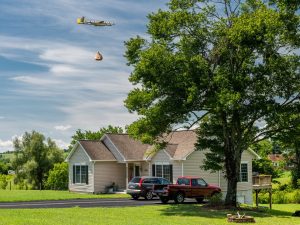 A first-of-its-kind residential drone delivery trial officially kicked off this afternoon in Christiansburg. Wing is a subsidiary of Google’s parent company, and Wing can now deliver items from Walgreens and Sugar Magnolia, along with many lighter Fed Ex packages, directly to homes that sign up for the service. James Ryan Burgess is Wing’s CEO:

This is a trial service undertaken with federal approval and monitoring. Virginia Tech is playing an important role in the process, and what is learned in Christiansburg is likely to be later incorporated into residential drone delivery practices across the country.

October 18, 2019 — In each of three suburban yards in Christiansburg, Virginia, a drone zoomed into view, hovered over the lawn, and lowered a package neatly onto the grass. Watching the deliveries were officials from the White House; the Federal Aviation Administration; Wing, the company that designed, built, and operated the aircraft, app for ordering, and delivery system; the companies whose products were inside the packages; and Virginia Tech, including Virginia Tech President Tim Sands.

Each of the organizations had been waiting expectantly for this moment; most had been working towards it for years.

But some of the most important people on the scene were the three families whose yards became the inaugural sites of the first residential commercial drone delivery program in the United States. They, and other members of the community, will have the chance to help shape the future of drone delivery in the U.S.

The flights marked the launch of a unique air delivery service from Wing, an offshoot of Google’s parent company Alphabet. Wing has been working with the Virginia Tech Mid-Atlantic Aviation Partnership (MAAP) since 2016 to bring drone delivery to the U.S.

“This is a big day for Wing, MAAP, and Virginia – another first in this industry that is happening right here in our Commonwealth,” said U.S. Sen. Mark Warner. “I believe that unmanned systems have the potential to be a real game-changer, and I’m proud that Virginia is leading the way in testing and safely integrating this technology.”

This trial service is unfurling under the aegis of a federal drone-integration program that emphasizes community feedback, giving southwest Virginia a unique voice in the rollout of a transformative technology.

“When Wing first began talking with the Mid-Atlantic Aviation Partnership, we knew immediately this was a project the university should support,” said President Sands. “We like bold, visionary ideas, strong partnerships, and the challenge of doing something that’s never been done before.”

Drones can transport small packages to consumers’ homes more quickly and safely than traditional ground transportation, with a tiny fraction of the carbon footprint. A parent with a sick child at home can have cold medicine delivered in minutes without having to leave the house; a worker on a tight schedule can get a hot lunch; a family on a picnic can order the sunscreen they forgot to grab before they left the house.

Turning that compelling vision into a practical reality has required clearing daunting engineering and regulatory hurdles. Wing has conducted tens of thousands of test flights all over the world and extensive research in Virginia with MAAP, a site designated by the Federal Aviation Administration to help facilitate integration of unmanned aircraft systems into the national airspace.

“This is a pivotal moment in aviation,” said Mark Blanks, MAAP’s director. “Package delivery has been one of the most sought-after applications for unmanned aircraft, but doing it well requires solving some of the hardest problems in the industry. It’s a privilege to partner with Wing to enable a service that we believe will transform the industry and bring real value to our communities.”

When Wing and MAAP first began working together in 2016, the company was still under the umbrella of X, Alphabet’s innovation division, and preparing to conduct their first U.S. tests with external users. Wing’s drones delivered over a thousand meals to Virginia Tech students and staff that fall. It was a landmark achievement that kicked off several more years of increasingly complex research and testing — of the aircraft itself, and of sophisticated software for functions managing air traffic and identifying nearby drones, both critical components of an aviation ecosystem that’s evolving rapidly.

In 2018, Wing and MAAP won spots in the federal UAS Integration Pilot Program (IPP) as members of a Virginia Team led by the commonwealth’s Center for Innovative Technology. MAAP manages the team, which focuses on advancing three high-priority applications for drones — including package delivery.

Selection for the program provided a clear path forward for the groups to collaborate on the delivery initiative. In April, Wing became the first drone company to be certified as an air carrier by the Federal Aviation Administration, opening the door for them to deliver goods for hire under the same regulatory structure that governs commercial manned aviation. Months of additional testing and public outreach followed, as Wing and MAAP worked to understand the community’s expectations and hopes for drone delivery.

Public outreach is an essential element of the IPP, which pairs companies developing applications for drones with the federal and state agencies that will play a role in regulating them and the local communities that will be the true proving ground for their value.

Now, Christiansburg residents will get an early taste of this next era in aviation.

“We’re incredibly proud that Virginia could assemble the right team to bring this historic moment in drone integration to our own communities,” said Ed Albrigo, the president and chief executive officer of the Center for Innovative Technology. “This event today demonstrates the power of meaningful public-private partnerships — and Virginia’s ability to lead the way in innovation.”

Wing’s aircraft will take off from the company’s new operations site in a commercial district of Christiansburg and fly to homes in nearby neighborhoods, delivering goods on demand from Walgreens and local retailer Sugar Magnolia and select qualifying packages from FedEx. The typical time from order to delivery is less than ten minutes.

Over the coming months, Wing and MAAP will continue to work with the community, seeking feedback on what’s working well about the service and how it could be improved.

“As exciting as this launch is, what’s going to be most rewarding is seeing how the community responds to this technology as it becomes part of the fabric of everyday life,” Blanks said. “We’ve been working hard to get drone delivery to the point where it could become routine — now we get to see it roll out, and we want to hear what people have to say.”