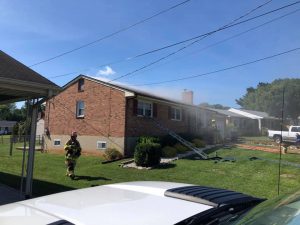 UPDATE: The Roanoke County Fire Marshal’s Office has concluded their investigation and determined the fire on Dairy Road was electrical in nature and damages are estimated at $20,000. Also, it was determined that the occupant was not at home at the time of the fire.

PREVIOUS NEWS RELEASE: Roanoke County Fire and Rescue responded at about 3:30 p.m., on Friday, August 30, 2019 to the 5900 block of Dairy Road, which is located in the Hollins area, for the report of a residential structure fire. First arriving crews from Station 5 (Hollins) found smoke coming from the eaves and front door of a single story brick home. Upon entering the home, crews found smoke and fire in the basement area of the home. The fire was brought under control in about 10 minutes. There is a fair amount of smoke and fire damage to the home. A single male occupant was at home at the time of the fire but was able to escape unharmed. There were no injuries. The occupant will be displaced but is staying with family in the area. The Roanoke County Fire Marshal’s Office is on scene to investigate a cause and estimate damages.