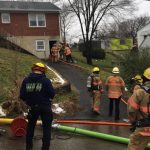 (update 12/16) The Fire Marshal’s office has determined that this fire was electrical in nature and caused about $6,000 in damages

(original news release): Roanoke County Fire and Rescue responded at 11:10 a.m., on Saturday, December 15, 2018 to the 200 block of Crestview Avenue, in the Town of Vinton for the report of a residential structure fire. First arriving crews found light smoke coming from the basement and the back of the house. The home was occupied by a family of four, and no pets, at the time of the fire. The fire was brought under control in about 45 minutes. The family will be displaced and are staying with family in the area. There were no injuries to people or pets. Crews from Vinton, Mount Pleasant, North County, and the City of Roanoke responded to the fire. The fire is believed to have been electrical in nature, however, the Roanoke County Fire Marshal’s Office is on scene to investigate a cause.  The house did have working smoke alarms, however, the family was aware of the fire before they sounded.