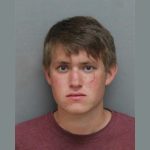 A 21-year-old Blacksburg resident is charged with DUI following an early-morning crash in the town. Police say 21-year-old Tanner Carlat was at the wheel when his vehicle left the roadway, flipped over and struck the front porch of a house. Facebook and LinkedIn pages under Tanner Carlat’s name say he is a Virginia Tech senior who went to high school in Leesburg.

NEWS RELEASE: At approximately 2:30 a.m. on Wednesday August 28, Blacksburg Police Department responded to a Motor Vehicle Crash in the 1000 block of Progress Street involving a single vehicle. The vehicle ran off the road, struck a utility pole and a fence. The vehicle then flipped over and struck the front porch of a house. The driver, 21 year old Tanner Carlat of Blacksburg, was transported to LewisGale Hospital with minor injuries. Once released from the hospital, Carlat was charged with §18.2-266 Driving motor vehicle, engine, etc., while intoxicated and was transported to Montgomery County Jail.