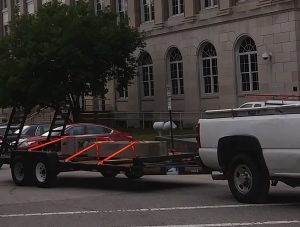 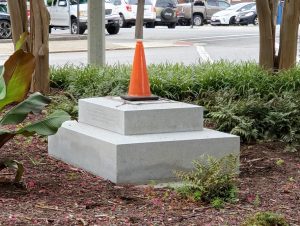 This is what remains. (Photo: Ian Price)

The Robert E. Lee Memorial in downtown Roanoke was knocked over overnight, and for now it is in storage. In a statement released this morning, city officials say an officer on patrol was first to notice the memorial lying on its side, and the damage appears to be intentional. This comes after Roanoke City Council had started the process to possibly remove the memorial from Lee Plaza across from city hall, starting with a public hearing on August 17th. City officials say  crews removed the memorial and placed it in storage until that legal removal process in completed. In the meantime, its toppling is being treated as a criminal act, and Roanoke Police are investigating.

Among those expressing disappointment in the way the memorial came down: Vice Mayor Joe Cobb. More from WFIR’s Evan Jones:

Mayor Sherman Lea expressed similar disappointment, but the city will go ahead with its plan to legally consider the memorial’s future.  Evan Jones has more with the mayor:

On Wednesday, July 22, just before midnight, a Roanoke Police Officer was driving in the area of 200 Church Avenue SW when he observed the Robert E. Lee Monument lying on its side, broken into two pieces. Preliminary investigation and evidence indicates the monument was damaged intentionally.

“It is an unfortunate incident, but this will not deter us from going through the legal process to remove the monument,” said Mayor Sherman Lea. “We have a public hearing scheduled for the second Council meeting in August to allow citizens to give their input on this matter, and we will proceed based upon the outcome of the public hearing.”

City Manager Bob Cowell stated, “It is unfortunate that this has occurred in light of the Council having initiated the process provided in State Code to facilitate the lawful removal and relocation of the monument.  I am certain the Council will proceed with the process and render a final decision on the fate of the monument.   City crews have removed the damaged monument and it will remain in storage until further action is warranted based upon the Council decision.  The Roanoke Police Department has initiated an investigation into this act of vandalism and it will be addressed in accordance with applicable state law.”

No arrests have been made at this time regarding this incident. This is an ongoing investigation. Anyone with information about this incident is asked to call (540) 344-8500 and share what you know. You can also send a text to 274637; please begin the text with “RoanokePD” to ensure its properly sent. Both calls and texts can remain anonymous