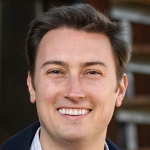 5th District Congressman Denver Riggleman has been in office for just three months, but he already has an announced opponent in the 2020 election. Charlottesville Democrat Roger Dean Huffstetler used the G.I. bill to graduate from Harvard Business School and later co-founded his own technology startup. The Republican Party of Virginia says Huffstetler is a “multi-millionaire, out-of-touch liberal from California” who has lived in Virginia for only a short time.

News release: Today, entrepreneur and Marine veteran, Roger Dean Huffstetler, officially launched his campaign for Congress in Virginia’s 5th Congressional District, currently held by Denver Riggleman. Huffstetler issued the following statement: “I’m running for Congress because the problems facing our country require a new generation of leadership. Partisan-bickering and special-interest politics have no place in government. We all want the same thing: a chance to provide our children with a better life than our own. This campaign is about everyone, which is why I’ll fight for every family in the 5th District to have a place in a more prosperous, inclusive future.”

Roger Dean lives in Charlottesville with his wife Emily, who works as an OB-GYN at Martha Jefferson Hospital, and his daughter, Alice Sue.

Republican Party of Virginia statement: Richmond, VA – Roger Dean, or RD, Huffstetler is back after a failed attempt to secure the Democrat nomination in Virginia’s Fifth Congressional District in 2018 and throwing his full support behind the virulent anti-Semite nominated in his stead. The San Franciscan millionaire couldn’t win his crowded primary, even though most of his donations came from Massachusetts and California.

A multi-millionaire, out-of-touch liberal from California, RD has only lived in Virginia a short time. So short, in fact, that he had to borrow a truck, a farm, and a fake accent for his first campaign ad. Co-founder of San Francisco based tech company, Zillabyte, RD decided he’d had enough of the cushy west coast lifestyle and headed to Virginia… in mid 2016.
Since RD is so new to Virginia, he may have missed some of our recent, embarrassingly national news. Here are a few questions you could ask him:
“The last thing Virginia needs is another out-of-touch, Californian liberal representing them in Congress,” said RPV Chairman Jack Wilson. “Looks like RD didn’t learn from his first foray into politics; the people of Virginia do not want his radically liberal policies. RD should run in Danville, California, NOT Danville, Virginia. We look forward defeating him or whomever the Democrats nominate in 2020.”