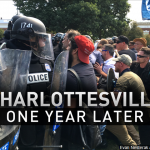 (AP)  A day after tensions between police and community activists nearly boiled over on the University of Virginia’s campus, the city of Charlottesville plans to mark Sunday’s anniversary of a deadly gathering of white supremacists with a rally against racial hatred. But 115 miles away in Washington, the principal organizer of last year’s “Unite the Right” event will hold a “white civil rights rally,” and police are preparing for counterprotesters.Jason Kessler abandoned plans for a similar anniversary event in Charlottesville. His Washington permit application says he expects 100 to 400 people Sunday afternoon in Lafayette Park, near the White House.

But some leading figures in the white nationalist movement have said they won’t attend or encouraged supporters to stay away. And the events likely will be dwarfed by counterprotests, for which permits also have been issued.