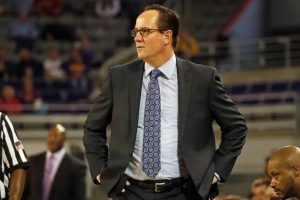 Marshall, who has long been known for his combustible sideline persona, came under scrutiny when former player Shaq Morris claimed he’d been struck twice by his coach during an October 2015 practice. Morris also claimed that he’d seen Marshall choke assistant coach Kyle Lindsted, who soon departed to become an assistant at Minnesota.

Wichita State Director of Athletics Darron Boatright has accepted the resignation of Head Men’s Basketball Coach Gregg Marshall, effective immediately, according to a media release from the university.

“This was a difficult decision, but one I feel was necessary for my family, the university and, most importantly, the student-athletes,” Marshall said. “I remain grateful for my years spent at Wichita State. I wish to thank the coaches, student-athletes, the university, the community, and all of Shocker Nation for their unending dedication, support and loyalty. I am incredibly proud of this men’s basketball program and all it has achieved over the past 14 years and am confident of its continued success.”

As part of Marshall’s resignation, the University has agreed to a contract settlement for $7.75 million to be paid over a period of six years. The university’s Intercollegiate Athletic Association will cover the settlement.

“Our student-athletes are our primary concern,” said Director of Athletics Darron Boatright. “While the university acknowledges the success of the basketball program under Coach Marshall, this decision is in the best interest of the university, its student athletes and the WSU community. WSU will continue its pursuit of excellence with the help of its student-athletes, staff and loyal supporters of the basketball program.”