Cause determined for building fire on Hollins campus 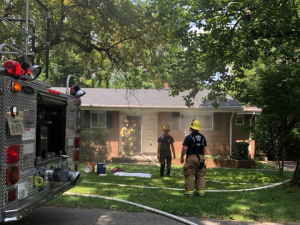 UPDATED news release: The Roanoke County Fire Marshal’s Office has completed their investigation of the fire at Hollins University and determined it to be accidental electrical due to construction on the property. The house was vacant and ready for demolition. The fire was brought under control in about 30 minutes and damages are estimated at $5000. There were no injuries.

PREVIOUS: Roanoke County Fire and Rescue responded at about 2:30 p.m., on Thursday, July 12 2018 to the campus of Hollins University in northern Roanoke County for the report of a structure fire. Initial calls were for smoke coming from a house. First arriving crews did find a structure with light smoke coming from the eaves . This was a vacant house on the campus that was scheduled to be demolished next week. There were no injuries. Crews from Hollins, North County, Masons Cove, and the City of Roanoke responded to the fire. The fire marshal’s office is on scene to investigate a cause.