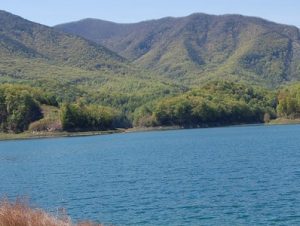 NEWS RELEASE: The Western Virginia Water Authority (Authority), owner of the Carvins Cove Dam located in Roanoke County, has issued a Stage II notification to the local Emergency Services Coordinators  and the National Weather Service effective June 17, 2020 because recent precipitation has caused two (2) feet of water to flow over the spillway of the dam.  The two feet of water flowing over the spillway is a trigger point in the Authority’s Emergency Action Plan for the Carvins Cove Dam and is not an indicator of any imminent dam failure.  The Stage II action level was also reached on May 20, 2020.

The Authority wants to you be aware that this notification was sent out as required by the Stage II notification.  A study completed in 2014 analyzed the dam’s design and determined the dam would not fail until 14-feet of overtopping occurred.

The Western Virginia Water Authority revised the Emergency Action Plan for the Carvins Cove Dam in conjunction with local emergency coordinators and the Department of Conservation and Recreation Dam Safety Division in December 2019.  This plan provides the coordinated communication and response to three levels of Emergency Notification.  Stage I is noted when there is not an emergency, failure is unlikely and storm developments are slow in escalation to a potential emergency.  The stage indicated a situation is developing such that the dam is not in danger of failing, but if it continues, a failure may be possible. Stage II is utilized when potential failure or storm development are quickly accelerating that could result in failure of the dam.  Two (2) feet of water flowing over the spillway is also an initiator of Stage II.    Stage III indicates an imminent failure or a storm that has reached a point that the failure of the dam has started or is imminent.  This stage indicates dam failure is expected or occurring and may result in flooding that will threaten life and/or property downstream of the dam.

The Western Virginia Water Authority will continue to closely monitor the reservoir level, spillway flow and forecasted precipitation and notify emergency personnel and residents of any changes.  Stage III, which is triggered by four (4) feet of water flowing over the dam, is not expected to be reached.