Blacksburg police: Man assaulted woman after picking up in his vehicle 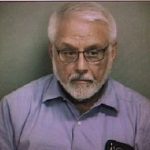 NEWS RELEASE: On Tuesday August 13, 2019, Blacksburg Police Department personnel received a complaint of a man assaulting a young woman after picking her up in his vehicle in the 1300 block of South Main Street. Police arrested Herbert Wayne Walley, 62, of Christiansburg, Virginia for Assault and Battery on August 14, 2019. He was taken before a Magistrate and released on a $2,000 personal recognizance bond. Anyone with information regarding this or similar incidentsis asked to contact Blacksburg Police at (540)443-1400, or call the tip line at 540-961-1819. Tips can also be emailed to ciu@blacksburg.gov.