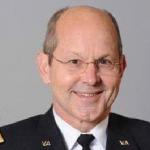 State Police say a retired VMI professor was struck and killed yesterday while riding his bicycle on Route 11 in Rockbridge County. Troopers say 64-year-old Thomas Baur of Lexington was northbound on his bike when a Silverado hit him from behind. Baur retired in 2013 after teaching Biology for 25 years at VMI. No word whether any charges will be filed against the vehicle’s driver.

News release: Virginia State Police Trooper J.T. Crewe is investigating a motor vehicle crash which resulted in a fatality.  The crash occurred Thursday (Aug 23) at 9:56 a.m. on Route 11, one tenth of a mile north of Wind Lane in Rockbridge County. A 2005 Chevrolet Silverado was traveling north on Route 11 when the vehicle struck a bicycle, which was also traveling north on Route 11. The 2005 Chevrolet was driven by Robert Lee Austin.  Mr. Austin was wearing his seatbelt and was not injured. The bicycle was operated by Thomas S. Baur, 64, of Lexington, Va.  Mr. Baur was transported to Stonewall Jackson Hospital where he later died. Virginia State Police Crash Reconstruction Team assisted with the crash. The crash remains under investigation.