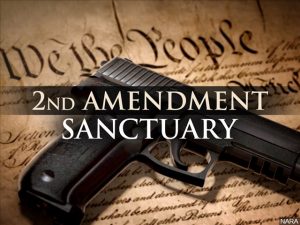 BEDFORD, Va. (AP) — Another county in Virginia has officially declared itself a sanctuary for Second Amendment rights as Democrats take control of the state government in Richmond.

The Bedford County Board of Supervisors approved the sanctuary resolution Monday night at a meeting attended by more than 1,000 residents.

More than 40 people spoke during the meeting’s public comment section, expressing concerns about gun-control bills in the state legislature.

The resolution is not legally binding. But it expresses the board’s position that public money should not be used to restrict the Second Amendment rights in the county or to help federal or state agencies in doing so.

Several counties have voted to defend gun rights after the Nov. 5 elections put Democrats in control of the Statehouse. Democratic Gov. Ralph Northam has said his party’s leaders will push for gun control measures.