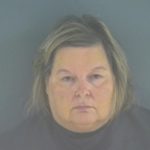 Allegations made about her actions and behavior led the Bedford County Sheriff’s Office, Department of Social Services, and Bedford County Public Schools Officials to begin investigating the circumstances surrounding this complaint. At the completion of this investigation, Ricketts was arrested on these four charges. Ms. Ricketts is being held at the Blue Ridge Regional Jail on a $3,000 secured Bond.