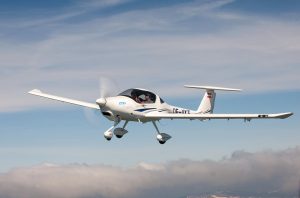 The DA20 is a two-seat aircraft. Photo: diamondaircraft.com

NEWS RELEASE: At approximately 1:10pm this afternoon, a Diamond DA20 aircraft made a hard landing on runway 24 causing it to leave the runway and come to rest in the grass safety area. There were two souls on-board. Roanoke Regional Airport Commission staff were near-by and responded immediately. Airport Rescue and Firefighting also responded and secured the scene.

At 1:13pm, Roanoke Fire-EMS was dispatched to the Roanoke-Blacksburg Regional Airport to assist in the response. One patient was transported for further medical evaluation and the other was treated on scene and refused transport.

While initially closed, the runway has since reopened and the airport is operational. The Virginia State Police will conduct the investigation.