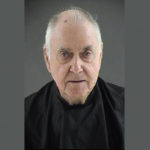 From the Bedford County Sheriff’s Office: On October 22, 2018, the Bedford County Sheriff’s Office received a complaint of possible sex offenses. The investigation into the complaint revealed the alleged offenses occurred between 1994 and 2010.  On December 4, 2018, Carl U. Wheeler, age 86, of Huddleston was arrested and charged with three aggravated sexual battery charges. He is being held in the Blue Ridge Regional Jail in Bedford without bond.