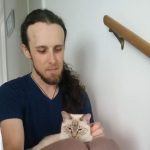 (Update from Roanoke County 12/5 4:10pm) On Wednesday afternoon Roanoke County Police, in conjunction with Roanoke County Fire & Rescue and the Virginia Department of Emergency Management, concluded the search for Paul Youmans who has been missing since Monday.  Youmans was located by a search team shortly after 1:00 p.m. in the area that had been previously noted as an area of interest off the hiking trail leading to Dragon’s Tooth. Youmans was found deceased from what appears to be a self‐inflicted wound.

(previous release) Roanoke County Police are searching along hiking trails in the Catawba for a missing 34-year-old man. Police say Paul Youmans’ vehicle was found yesterday in a parking lot near trails that lead to Dragon’s Tooth. The search effort includes bloodhounds, but at last word, Youmans has not been located. Police say while they are grateful for citizen offers to help in the search, it could actually hamper the effort, and they ask people to avoid the trail area as long as the search continues.

From Roanoke County Police: [We are] extremely grateful for the offers from a number of citizens this morning to help with the search for the missing man (Paul Youmans) in the Dragon’s Tooth area of Catawba Mountain. However, this is an operation involving specially trained technical rescue personnel and police operating in very hazardous terrain and adverse weather conditions. Well-meaning citizens attempting to help search could hamper the ability for the dogs to track scents, thus interfering with the operation. There’s also concern that someone might sustain injuries while trying to navigate the hazardous terrain, pulling resources away from the operation to tend to those injuries. The Police Department is asking people to avoid the trail area while the search operation is underway.

Previous: On Monday, December 3, at approximately 5:30 p.m. Roanoke County Police were called to a well‐being check in the 3600 block of Georgetown Road. Upon arrival police were notified by a friend that Paul W Youmans, 34, of Roanoke County was missing and had not been seen since early in the morning. Youmans is described as 5’9, approximately 140 lbs, with brown hair and blue eyes. There is no clothing description at this time.

Through their investigation officers were able to locate his vehicle in the parking lot near the hiking trails leading to Dragon’s Tooth in Catawba. A search was conducted by Roanoke County Police and Fire & Rescue, along with the assistance of several local blood hound tracking groups. The search was suspended around midnight due to darkness and the steep, rocky terrain of the trail system that was being searched.

On Tuesday, December 4 Roanoke County Police with the assistance of Roanoke County Fire & Rescue and the Virginia Department of Emergency Management resumed the search. As of this time Mr. Youmans has not been located. Police will resume the search again Wednesday.

Anyone with information is asked to call the Roanoke County Emergency Communications Center at (540) 562‐3265.