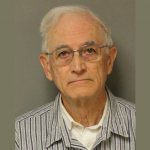 CLARKSBURG, W.Va. (AP) _ Authorities say a Pulaski County pastor has been accused of molesting a girl in West Virginia. The Harrison County Sheriff’s Office tells The Exponent Telegram that  76-year-old Daniel Houston Shafer is jailed in Dublin, Virginia and that he’s waived extradition. Detective Sgt. Zach Mealey says Shafer is accused of inappropriately touching a girl younger than 12 while visiting Harrison County this year. He says Shafer will be taken to county Magistrate Court for an initial appearance on a first-degree sexual abuse charge. The sheriff’s office has until next Monday to pick Shafer up. It is unclear if Shafer has a lawyer who could comment for him.