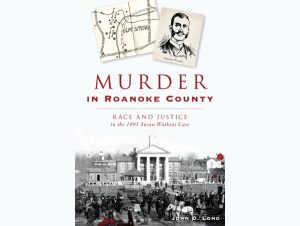 Roanoke Valley historian John Long has resurrected the somewhat lost story of a Roanoke County 1891 murder trial, one that attracted plenty of local and national attention at the time. It’s the murder of Susan Watkins, and trial of her husband Charles — an African-American with a white lover in the segregated south. The book is titled “Murder in Roanoke County”, and WFIR’s Evan Jones spoke with Long:

John Long will sign copies of his book Saturday at Book No Further in downtown Roanoke, starting at 1:00 pm.