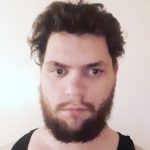 NEWS RELEASE: Virginia State Police Trooper J.D. Cockerham is investigating a motor vehicle crash which resulted in a fatality. The crash occurred Friday, (Aug 16) at 10:14 p.m. on Route 636, one tenth of a mile east of Route 677 in Franklin County. A 1998 Buick Le Sabre was traveling west on Route 636, when the vehicle ran off the right side of the roadway, struck the guardrail and overturned. The driver of the Buick was identified as Timothy Ray Muterspaugh, II, 28, of Rocky Mount, Va. Mr. Muterspaugh was wearing his seatbelt and died at the scene. The crash remains under investigation.