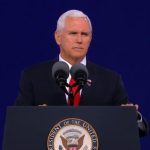 (from ABC News) Five individuals in Vice President Mike Pence’s orbit have tested positive for the coronavirus, including his chief of staff Marc Short and political aide Marty Obst. “Today, Marc Short, Chief of Staff to the Vice President, tested positive for COVID-19, began quarantine and assisting in the contact tracing process,” Devin O’Malley, press secretary for the vice president, said in a statement Saturday.

Sunday morning, multiple sources familiar with the matter told ABC News that in addition to an outside political ally of Pence’s four of his staffers have tested positive. One senior level source stressed that the three of the staffers have been quarantining since the middle of this past week. O’Malley said both Pence and wife Karen Pence tested negative for the virus on Saturday and a pool report indicated the tested negative again on Sunday morning.