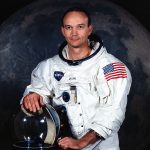 Papers from the collection of Michael Collins – the Apollo 11 commander who circled the moon while Neil Armstrong and Buzz Aldrin walked on it – is the subject of a new exhibit at Virginia Tech in the Newman Library through May:

The Salem Red Sox kick off their season at home on Thursday .. if you like to order tickets ahead of time online GM and Team President Ryan Shelton says that will be easier this season: 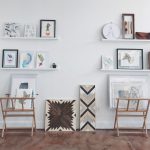 Local and regional artists have a new home for their creative work – and support services – provided by the “Virginia Design Collective” in downtown Roanoke. More from WFIR’s Gene Marrano:

“Code Girls” author hails from Roanoke and is here this week

A Roanoke native and journalist is in town on Wednesday to talk about her book on more than 10,000 thousand women that were employed to decipher enemy transmissions during World War II.  More on the “Code Girls” from WFIR’s Gene Marrano:

Bronco Mendenhall talks about holes to fill on UVA squad

The magic number for the Roanoke Rail Yard Dawgs to clinch an SPHL playoff spot is four points – and if the team behind them – Birmingham – loses that helps.

Some Roanoke storm drains getting a makeover 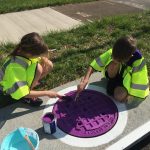 Over the next few weeks you may notice that some of the storm drains in Roanoke City will look much better – that’s because the Roanoke Arts Commission chose five artists to decorate six of those storm drains. Kim Bratic and her two older children are painting a composition called “Squidding Me” on a drain outside the Williamson Road Library. All of the storm drains will be painted by Earth Day on April 22; each artist received $400  from the city. Bratic submitted a design – but one from her 8-year-old son Alecks was chosen instead for the Williamson Road project.

The Virginia Tech women play for the WNIT title on Saturday but the Liberty men’s basketball team is stopped in the CIT semifinals.

Liberty University continues to fill out its future FBS football schedule with three future games with the University of North Carolina. The flames will visit Chapel Hill in 2024 and 2031, and the Tar Heels come to Lynchburg in 2028. That makes seven ACC teams now on future Liberty football schedules.

From Liberty University: Liberty continues to fill out its future FBS football schedules, today announcing a three-game series against North Carolina. Liberty will make a return trip to Kenan Stadium in Chapel Hill, N.C., for games on Oct. 19, 2024 and Sept. 6, 2031, while the Flames will host the Tar Heels at Williams Stadium on Sept. 16, 2028. Liberty and North Carolina have previously faced each other with the Tar Heels opening the 2014 season with a 56-29 win over the Flames at Kenan Stadium. North Carolina was ranked No. 23 in the country at the time of the match-up, marking the first time Liberty faced a ranked FBS program. Liberty held a 22-21 lead with 9:25 left in the third quarter, before North Carolina scored 28 unanswered points over a four-minute span in the third quarter to pull away for the win.

Today’s announcement gives the Flames announced future games against seven ACC opponents, including home contests against Syracuse (2019), Virginia Tech (2022 and 2030), Wake Forest (2025), Duke (2026), Virginia (2027 and 2029) and North Carolina (2028). As part of its FBS transition process, Liberty has now announced completed football schedules for the next four seasons, plus match-ups that extend through the 2031 season. On Feb. 16, 2017, the NCAA approved Liberty’s waiver request to begin the two-year FBS reclassification process. Liberty completed its final season as a FCS program in 2017, playing as a member of the Big South Conference.

During the 2018 season, Liberty will compete as a FBS independent program and will not be eligible for postseason competition. At the conclusion of the two-year transition process, Liberty will be a full-fledged FBS program in 2019, which will include the opportunity to compete for bowl game appearances. The Flames will host their first FBS home game against Old Dominion on Sept. 1, 2018, the first of four FBS teams to visit Williams Stadium in 2018 to meet the FBS reclassification criteria. The 2018 home schedule also features FBS matchups against North Texas (Sept. 22), Troy (Oct. 13) and New Mexico State (Nov. 24).

The Virginia Tech women and the Liberty Men aren’t in the “Big Dance” but they’re still playing hoops.