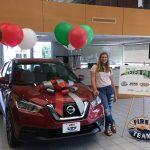 The organization that administers the “After Prom Grand Finale” in southwest Virginia is asking for your on-line votes to receive a $25,000 grant that can help it continue the program in the future. YOVASO — Youth in Virginia Speaking Out — now administers the program that encourages alcohol-free after-prom nights in high schools across southwest Virginia, but its original funding source to administer the program no longer exists. After-Prom Grand Finale Coordinator Becky Parr joined us live in studio for a conversation about the event — and how your votes can help fund its continued existence:

Click here to vote for this program. You may do so up to 10 times a day, and the deadline to do so is midnight August 23.