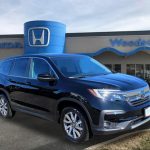 One of the nation’s oldest Honda dealers has new owners — for the first time in its history. Woodson Honda has been sold, ending three generations of same-family ownership. It is part of a nationwide trend toward consolidation among auto dealers, as WFIR’s Evan Jones reports.